Can You Multitask While Driving?

Multitasking while driving has become commonplace in today’s busy world. Pressure from work and school can lead to drivers trying to read text messages or check emails while driving. Teen drivers are especially prone to texting and taking videos and pictures while driving. Multitasking behind the wheel, however, is an extremely dangerous practice that can cause car accidents. No driver, no matter how experienced, can safely multitask while driving. 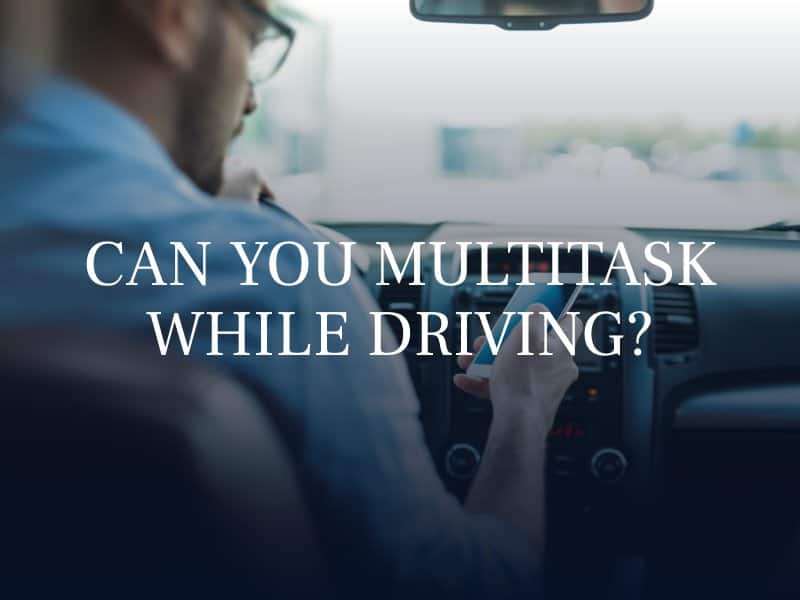 Multitasking means doing more than one thing simultaneously or switching rapidly from one task to another. Multitasking takes a great deal of concentration, as the brain is focusing on more than one task at a time. Studies have shown that multitasking drains the brain of energy and actually results in lost time rather than greater productivity, as most people assume. This is because a multitasker completes tasks with reduced quality and efficiency.

How Does Multitasking Affect Driving?

Almost all drivers multitask to some degree, even if they don’t realize it. Operating a motor vehicle is already one task; doing anything else, such as listening to music or talking to passengers, is multitasking. Certain types of multitasking while driving, however, are more dangerous than others. Engaging in anything that absorbs the driver’s attention enough to remove it from the task of driving could cause a car accident.

Multitasking behind the wheel can affect driving in many dangerous ways, such as reducing a driver’s ability to quickly react to changing roadway situations. A driver who is distracted by multitasking may not notice a child run out into the road, for example, and may not be able to hit the brakes in time to stop. If the distraction requires the driver to remove his or her hands from the wheel, such as texting and driving, this can also delay the driver’s ability to maneuver the vehicle out of harm’s way.

The only way a driver can safely control a motor vehicle is by dedicating 100 percent of his or her attention to the driving task. A driver must watch the road, keep both hands on the wheel and be prepared to hit the brakes at a moment’s notice. Any form of multitasking or distracted driving, no matter how minor, can be enough to cause a devastating car accident.

In 2019 alone, 3,142 victims were killed by distracted drivers (source: the National Highway Traffic Safety Administration). Thousands of others suffered severe injuries in distracted driving accidents. These accidents are often serious or catastrophic, as the distracted driver may not hit the brakes before crashing into another vehicle, bicyclist or pedestrian.

Driver distraction increases the odds of major accidents such as rear-end collisions, high-speed collisions, head-on collisions and T-bone accidents. For example, a distracted driver may be unaware of his or her surroundings and not realize that a light has changed or that pedestrians are crossing the road. Distracted drivers may also drift out of their own lanes and cross medians into opposite-direction traffic.

Injured in a Crash With a Distracted Driver?

If you were recently injured in a car accident in Los Angeles and you believe the other driver was multitasking or distracted at the time of the collision, you may be entitled to financial compensation from his or her insurer for your medical bills and vehicle damage. The insurance system in California holds the at-fault driver legally and financially responsible for related expenses.

Contact a car accident attorney in Los Angeles for assistance with the claims process. It can be difficult to prove distracted driving. A lawyer can guide you through the legal process and fight for maximum compensation on your behalf.