Whenever the holiday season rolls around, you can be assured there will be something on the news about how deadly driving can be this time of year. We decided to dig into the data and find out for ourselves which days of the year are the deadliest to be on the road.

The National Highway Traffic Safety Administration devotes much of their study to auto accidents that involve fatalities. This is an important area of study and the NHTSA is concerned with these statistics in order to find better ways to prevent them.

And before we dive into the list there is some good news. You can see from the graph below that although traffic incidents still take the lives of roughly 30,000 people in the United States and account for roughly 1% of total deaths per year there has been a significant drop in fatalities over the last 50 years. This is almost certainly a direct result of research and changes in vehicle construction. 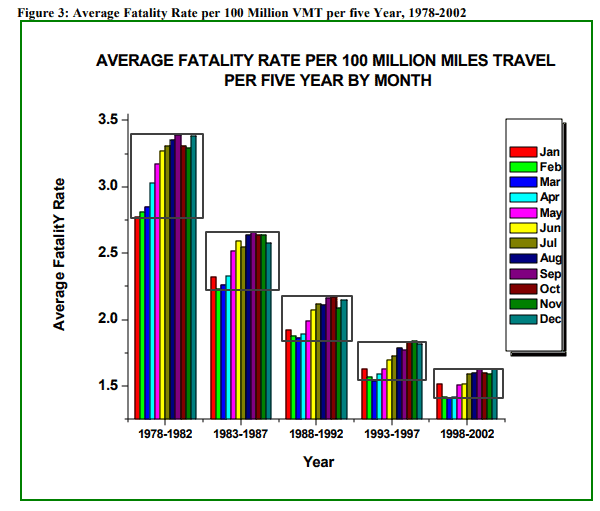 We’re going to go through the list backwards to give you plenty of time to guess the deadliest day of the year for car accidents. Have your guess ready?

If you ask Google what is significant about this day you’ll probably be surprised to find there is actually a lot written about this day. A lot written on the Internet that is as October 3rd has been designated Mean Girls day. It also happens to be the day the OJ Simpson murder verdict was read. As for what makes it so dangerous, the majority of vehicle fatalities occur during the summer months and perhaps this late summer day mixes with the shortening of the days and that drive home has a bit less visibility as earlier in the summer.

July 5th is significant for falling right in the middle of summer and also the middle of when the most deadly accidents happen in the US. Looking at the graph below you can see the majority of deaths occur every year between July 1st and October 1st. 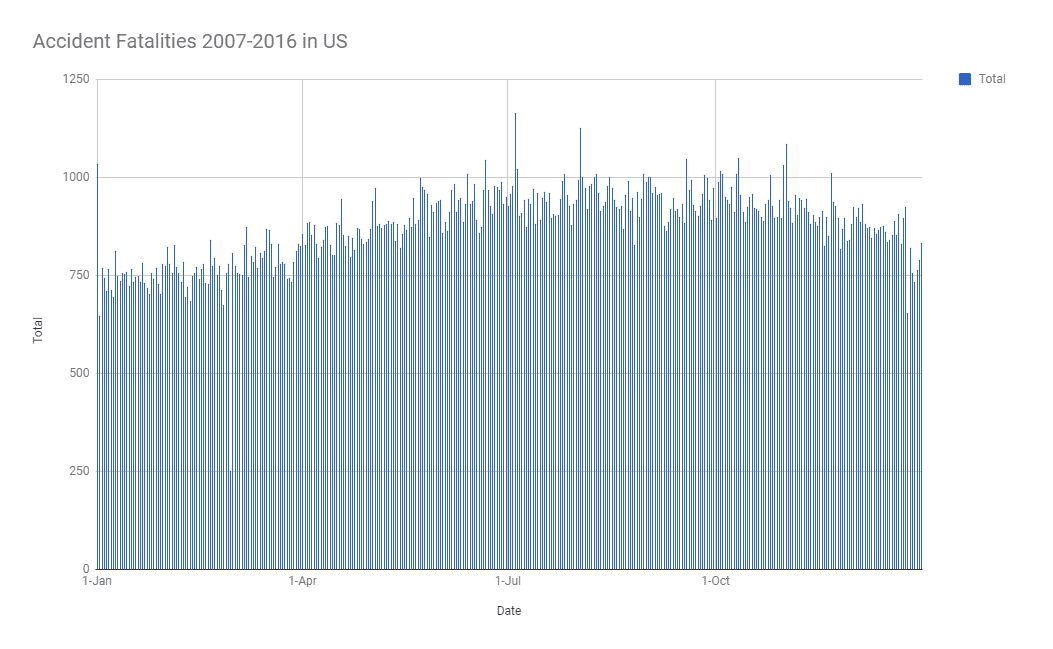 You’re probably wondering what that outlier dip is towards the front of the year. That’s leap day which means in this data set there were only three of them.

It is no surprise to see this holiday filled with children running around the streets at night with visibility impairing costumes over their eyes on the list. But it should be a stark reminder that if you are on the road on October 31st to be extra cautious because you know the new obstacles running around that night.

New Year’s has long been the holiday of debauchery and over consumption of alcohol. Whether in big cities with hour long waits for taxis or in rural areas where people decide to take their chances, drunk drivers make up a large portion of the vehicle fatalities on New Year’s Day. Everyone knows the dangers of this holiday so don’t be a statistic, call an Uber instead.

June 21st happens to be the longest day of the year. The rises extra early and sets extra late. It is also around this time that people are starting their summer breaks from school or graduating. We all get excited when summer finally rolls around again but don’t let the feeling overtake you so much that you’re distracted while driving.

There really doesn’t seem to be any significance to this date. It is definitely in the heart of summer but other than that just a day that happens to have a lot of traffic fatalities.

Again, nothing significant about this day. Possibly a good reminder that any day could be a dangerous time to be on the roads so always stay alert.

This happens to be All Saints Day but in terms of traffic accidents it is probably more significant for being the morning when many people are driving home from a Halloween party from the night before. Whether you’re on the road coming home from a party or on the street leaving an event as a pedestrian it is good to be aware that this day is quite deadly.

This day appears right in the very middle of summer and the bell curve for driving fatalities.

Did you guess it? That’s right, the most traffic fatalities happen on our nation’s birthday, the 4th of July. It is no surprise as this day has become quite popular for parties and drinking. What a shame that so many lives are lost in the height of such a joyous occasion.

Well that is the list. This data covers years from 2007 through 2016. And as a bonus here are the days with the least roadside fatalities, with the least being January 2nd (not counting February 29th of course).